When terrorizing trade routes, buccaneers tools must serve multiple purposes to earn their place. This artifact meets that requirement. The snake head S-hook that fastens this pirate’s garrote to the wrist, bears the word UBIQUE. This solid bronze hook, which secured the sword belt at the waist (shown in context, photo), was part of the British naval uniform during the reign of King George I. Ubique, Latin for everywhere, was the motto of the British Navy and artillery divisions of the time. Pirates, being the scavengers they are, collected useful items from their victims, be they civilians or fallen soldiers and sailors of the realm. The triple wrap provides enough leather for a good hand hold on each end and ample length for any sized neck.  A cutthroat’s prize possession, not to mention a handy friend in close combat on deck or in a publick house.

Handmade in the U.S.A. by gbb Custom Leather.

There are no reviews yet. 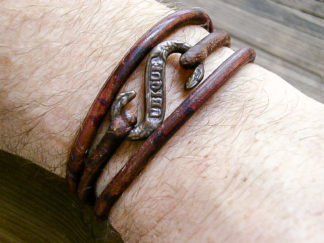