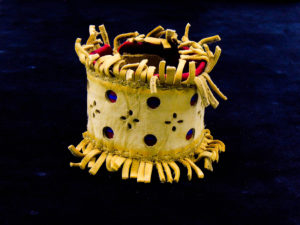 This group of pieces was inspired by my many forays to the following museums, throughout my life — The Southwest Museum — Los Angeles, Oklahoma’s Native American museums, and The Museum of The American Indian — New York City; among others.

The style, motifs, techniques and materials used by native Craftsmen, including Women — living by their ‘wits and skills’ — have always interested me.

The Native American’s respect for animal neighbors, efficient use of natural materials, and trade — for the necessities of everyday life — are representative of the philosophies and circumstances behind the Treasures of our Native American Museum collections.

Out of my respect for Native American Culture, and my utmost regard for the Craftsmen who created those practical, beautiful, elegant relics — the items here are merely impressions — inspired by the general look, motifs and materials of the authentic artifacts.

A few years back, when I heard rumors of an upcoming film, “The Lone Ranger” I began researching “Tonto’s” tribe. Though a fictional character, I felt that an accurate film depiction of his regalia would be required. Research information regarding Tonto and his tribe was ‘thin.’ There was one reference to Tonto’s tribe as being, “North Central Arizona White Mountain Apache” — in a radio show that preceded the 1950s television show… Only one reference, but it was very specific!

Since I was a kid, mostly due to cost, I have tested my ideas using the minimum amount of materials possible; to see if a concept “worked.” I think, ‘If the point of a Design can be realized in a Cuff… it can then be translated to larger projects.’

The items in this category with the designation, “LR#” are Cuffs created out of my research for “The Lone Ranger” film.